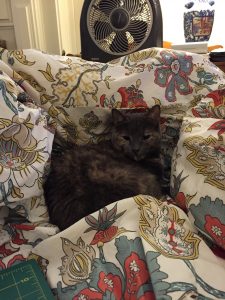 A few years ago I was working an election and it was one of the local ones, so that meant we had about 58 voters all day. To give you an idea, the same precinct had nearly 800 voters for this recent presidential election.

Anyway, so I was talking to a couple other poll workers, and we were talking about our pets, and I said something about Rani talking to me. This one woman, turns to me and sneers, “Pets don’t TALK to people. They’re ANIMALS.” My reply was something along the lines of “They hell they don’t! My cat talks ALL THE TIME.” And she does! She’s a Tortie, so she’s very vocal.

Not only do I know Rani talks to me, I think she understands WAY more than she should. Take this morning for example.

I went to bed late, as I like to do, but not too late. Probably around 1:00 a.m. I was a little restless so she went in the other room. That sometimes happens if I’m disturbing her royal highness, but at some point I usually wake up and she’s on my lap or next to me. I woke up around 6:00 a.m. and realized she wasn’t there. And hadn’t been there all night. I used the bathroom and when I came out I could see she was on her favorite spot on the back of one of the couches.

Me: You didn’t come to bed last night? What? You don’t love me anymore?

Hey, I live alone and work from home. I talk to my cat. Don’t judge.

I went back to bed to get a little more sleep, and I hear her jump down from the sofa. (Small house. Quiet neighborhood.) She saunters into the bedroom, gets up on the end of the bed, stares at me for a minute, sighs heavily, and climbs on my lap. Then sighs again as she lies down.

And I laughed because if that wasn’t her saying “FINE. If you’re gonna whine about me not coming to bed, then here I am. But it’s under protest.”

Cat*, a fellow knitter I recently met, has a theory about cats. Dogs won’t let you be uninvolved in their lives. They force you to deal with them. But cats can be independent and indifferent. She thinks cats size up their person and give back what they get. The person thinks cats are aloof and standoffish, then that’s the attitude the cats give them. Like “Fine. You want that? Whatever. I’m good.” And once that pattern is set, there’s no going back. If you change your mind, the cat’s all “No, no. This is what you wanted. This is what you got. Too late now, puny human.”

But if you want a loving cat who cuddles and plays with you, they’ll eventually warm up to you and give that back. I’ve lived with 3 cats, all with WILDLY different personalities, but none were aloof, and all loved being around their person. Rani will play both Fetch and Catch. She spends about 20 hours a day with me, and wants to cuddle all the time.

When she’s not sleeping on the couch.

Lynda the Guppy
aka Rani Minion

Eight years ago today Barack Obama became the first African American president in our nation’s history. I think about that a lot, and I wonder if the Obama’s celebrate this date. I wonder if they even remember what the date was, as at that point a presidential campaign is so insane they may only know what day it is because it’s election day so it must be Tuesday.

I remember this day eight years ago so very clearly because it was my mom’s 60th birthday. The last healthy one she had. I remember I gave her 60 beautiful roses and had Indian food delivered. She didn’t want to go out because she knew history was being made no matter which way it went, so we ate in front of the tv and watched the election results. After growing up in the 50s and living through the 60s, she was amazed. She voted for him, of course. But she honestly never thought she’d see the day where we had a black president. She was so proud of how far our nation had come that we would elect him.

Four years later she had been gone only three months, and I spent Election Day working my first election and once again hoping for an Obama presidency. I was nervous and scared about working the election, but it was an amazing experience. I was so grateful it was after her birthday that year, because I was a basket case for all of October. Things were Really Not Good for me then, and I basically cried when I breathed for weeks leading up to her birthday.

I’ll be working the election again, as I have every one since 2012. It’s still an amazing and humbling thing to do. I’ll be honest and tell you I’m more than a little worried about something happening at the polls, but I also know Mom’s watching. And pretty pissed off she wasn’t able to vote for Hillary. She would have been ALL OVER voting for her. And if she was retired by now, I’m sure she would have volunteered for the campaign.

But I know when I cast my vote, she’ll be in the booth with me. She’s the one who taught me how to vote when I was little and we walked to my parents’ polling place. My parents and I are of a similar mind politically, and as the only Democrats in a family of Republicans, it sometimes gets a little dicey. But she’s the one who taught me to think for myself. To look up the issues. To not just be a voter, but be an INFORMED voter. If I had questions, she’d answer them. If I wanted to know how she was going to vote, she’d tell me, but always with the caveat that I should make up my own mind, and not just vote the way she and my dad did.

All during this campaign I’ve ached to talk to her, and I know she would have had a LOT to say about the shenanigans. Most of it would have been colorful. Who do you think taught me how to swear?

So today, on her birthday, I miss her so much. And on Tuesday when I vote, I’ll miss her even more. But I think she’d be proud of what I’m doing and how I’m going on without her. At least I hope so.

Happy birthday, Mom. I wish you were here. 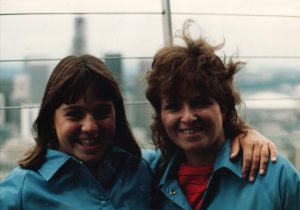 And don’t haunt me because I posted this picture.

Love,
Lynda the Guppy
aka The Bear’s Daughter