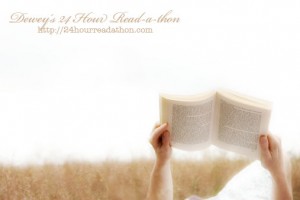 There’s a 24-hour readathon that goes on twice a year, I think. It’s called Dewey’s Read-A-Thon. The goal is to read as much as you can in a 24-hour period.

I’ve tried it before, but I didn’t plan my books well, and so I didn’t get through too much last time. Now I’ve stockpiled a bunch of holiday novellas and some ARCs and I’m going to cuddle with the cat, leave the TV off and just read for the entire day.

I’ve put this post up as a placeholder. I’ll be updating it throughout the 24-hours (which starts at 5 a.m. my time on Saturday) with what books I’ve read and anything else Read-A-Thon related, so be sure to check back frequently.

And, because this is me, I’ll also be tweeting throughout the day.

Update 4:00 a.m.: We’re an hour from the official start, and I’ve finally chosen my first book. It’s Jennifer Greene’s Trouble in Paradise. An older category which has been reissued digitally. Greene is one of my favorite authors, and I’m working my way through her backlist, so I think you’ll see a bunch of her stuff today. This one is a Marriage in Jeopardy book. And y’all know I eat those up like candy.

Update 8:00 a.m.: My first book is done! Trouble in Paradise by Jennifer Greene. I enjoyed it. I would have liked to have seen maybe 1 more chapter just to really show how things are better now, but I liked Griff and Susan and their relationship a lot. I had to laugh at them using a phone book to find the numbers of Tom’s friends. LOL. Other than that, though, the book never felt dated, as some category books can after a time. I’ve always found Jennifer Greene’s books to stand up well over time. Not sure what’s next. Maybe a nap. Maybe some breakfast. Back in a bit.

Update 3:00 p.m.: Well. I’ve had a little breakfast and a nap and I’ve gone on to finish book 2. Another Jennifer Greene book, Quicksand. Turns out I’ve already read it, but it was nice to reconnect with a book I had forgotten about, and one I enjoyed. So what to read next? Hmmm…

Update 8:00 p.m.: Another 3 stories down. I hesitate to call them “books” because, really, they’re just little quickies. But ever so satisfying. I read Anne Rainey’s Cape May series. The first one, What She Wants was about Summer and Gage. Summer owns a B&B and Gage, a P.I., has come to visit his aunt. The attraction is immediate. The next two books, What She Craves and What She Needs are both about Tory (Summer’s friend and part-time assistant) and her to best friends Devon and Con. In What She Craves, we find out that Devon and Con have been in love with her for a while and the timing is right this New Year’s Eve to show her how they feel. The last book, What She Needs, is all about Con, Devon, and Tory dealing with some unexpected jealousy just days before Valentine’s Day. I haven’t read all of Ms. Rainey’s books, but I’ve loved what I’ve read. These were quick, sexy little stories and perfect for the Read-A-Thon.

Update 12 a.m.: I’ve finished two more. The first was Victoria Dahl’s Fanning the Flames. Early in the book is this quote: “He smelled the way a man should smell when he was in your bed and working hard for it.” WHY have I not devoured everything she’s written?! I’ve read her before and really enjoyed her books. Her heroes are sexy and wonderful and her heroines are smart and funny and not ashamed to go after what they want and need. This one was a short story which is the start of her Jackson Girls’ Night Out series. I’ve already downloaded the next book. The next book I read was Cynthia Eden’s Mine to Take. This hero is dangerous and obsessive and alpha. Yes, please. WE know he’s no threat to the heroine. But is she convinced? It was fantastic and I actually peeked at the ending because I was worried about who her stalker was. LOL. I was wrong. Thankfully, Trace wasn’t. I’m about to start Mine to Keep, which is the next book in the Mine series, and also about Skye and Trace, but this time it’s HIS secrets putting them in danger.

Update 4:30 a.m.: My final two books today are Mine to Keep by Cynthia Eden. The sequel to the last book I read. And also Katie Reus’ Breaking Her Rules, which is book 6 of her Red Stone Security series. A series I’ve enjoyed and didn’t realize I was so far behind on. I have three more books to read before I’m all caught up.

I’ll post my final thoughts in a separate post tomorrow, but in the meantime let me just say I’m looking forward to April.