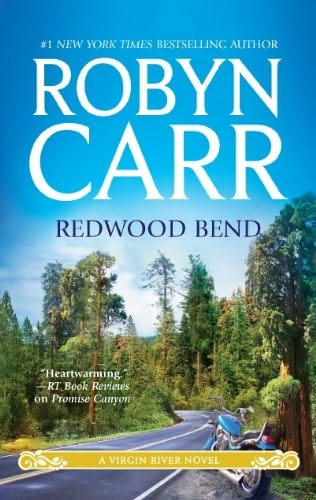 CAN CHANGING A TIRE CHANGE YOUR LIFE?

Katie Malone and her twin boys’ trip along the beautiful mountain roads to Virgin River is stopped short by a tire as flat as her failed romance. To make matters worse, the rain has set in, the boys are hungry and Katie is having trouble putting on a spare. As she stands at the side of the road pondering her next move, she hears a distinct rumble. The sight of the sexy, leather-clad bikers who pull up beside her puts her imagination into overdrive

Dylan Childress and his buddies are on the motorcycle trip of a lifetime. But the sight of a woman in distress stops them in their tracks. And while the guys are checking out her car, she and Dylan are checking out one another.

In one brief moment, the world tilts on its axis and any previous plans Katie and Dylan might have had for their futures are left at the side of the road.

WELCOME BACK TO THE RIVER

(This review was originally posted at Wicked Lil Pixie on March 8, 2012.)

I’ve been a fan of Robyn Carr’s Virgin River series since nearly the beginning, and one of the things I enjoy about her novels is the consistency. She introduces us to these characters, and makes us fall in love with them. Unlike a lot of other series books, she doesn’t “forget” the characters or only bring them back as convenient ways to further the plot. These characters come back again and again with actual storylines in future books. Just because a couple has a Happy Ever After in one book doesn’t mean they won’t hit a rough patch in another. Redwood Bend, which just came out, is book 18 in the Virgin River series, according to Ms. Carr’s website (www.RobynCarr.com). It was a nice addition to the series.

Katie, our heroine whom we met in her brother’s book Hidden Summit, is back for her own story. She has two young twin boys and is moving to Virgin River from Vermont when she and the boys get a flat just outside Virgin River. And of course it’s raining. And of course a nice group of motorcyclists stop to help. This is how our couple meet. A little outlandish of a meeting? Maybe. But for these two it works.

Dylan has flaws, but he believes his flaws are far more serious and damaging than they really are. He still sees himself as he was as a teenage TV heartthrob rebel with a family so dysfunctional it makes the Barrymores look like the Bradys, with his grandmother Adele being the exception. It was nice to watch him realize what we, the readers, have seen nearly since page one, and that’s what a nice, warm, caring guy he is. He’s not selfish, nor is he a curse for anyone he cares about.

Katie’s husband also has a presence in this book, even though he’s been dead for years. (Don’t worry. No ghostly appearances here.) He was a special forces soldier who was killed in Afghanistan when Katie was pregnant with the twins, and he received a Medal of Honor posthumously. In the beginning, Dylan is a little intimidated by Charlie. I mean, dead military hero who was the love of her life? And Dylan thinks he’s a major screw up?  OF COURSE he’s intimidated. Who wouldn’t be? but Katie talks openly with Dylan about her husband and his good and bad character traits, and it never really becomes a big issue between them. Katie says she loved Charlie, and would love him still if he had lived, but he didn’t, so she’s moving on. One of the nice things is that Charlie is neither lionized nor vilified. He was a real man who died too young, and without knowing his sons, but that’s the way life sometimes is. Sometimes it just sucks.

There were parts of this book that were a little too pat. For example, Dylan’s grandmother Adele is an aging, but still in demand, actress. When she comes to Virgin River to check up on Dylan, we learn that she’s good friends with Muriel, who is an actress on par with Adele. Really? This tiny little town with maybe 200 people and the one actress who comes to town just HAPPENS to be good friends with the only other actress in 100 miles? Granted, Hollywood can be a small town, and actresses of their stature are rare, so it makes sense, I guess, that these two would have become friends during their careers, but at no point at any other time did this come up. It was only brought to our attention because Adele needed a place to stay that wasn’t Katie’s. How conveeeeeeenient.

Also, at the very end of the book we learn something new about Dylan. It’s something that wasn’t really integral to the story, but he kind of blows it off as no big deal right at the end, and I think Ms. Carr missed an opportunity for her readers to learn something. In the past she has taken the time to teach us about midwifery and things like breast exams and other women’s issues, and by contrast it seemed what we learned about Dylan was added as an afterthought. Kind of a “gee, his childhood didn’t suck QUITE enough, so let’s dump a little more on him.”

All in all, I enjoyed this book a great deal. I liked that Katie didn’t rely on Dylan for every little thing. She could change the oil in her car and put up a swing set for her boys without having to ask her brother or some other guy in her life to do it for her, and the men in her life recognized that. They don’t treat her as some sort of delicate, fragile flower. She also doesn’t put up with any of Dylan’s crap. She calls him on stuff, and expects him to put just as much into their relationship as she does. She also doesn’t expect him to look out for her kids. She makes it ABSOLUTELY CLEAR that her kids are first. Full stop. No exceptions. And if he doesn’t like it, there’s the door, and make it quick, because she doesn’t have time for games.

Ms. Carr has developed a knack for creating characters who feel very real. This series is made up of people with real lives and flaws, accomplishments and doubts. This town, even with its overabundance of military men, feels very real. There are people  who die, either expected or not. There are births and miscarriages, new homes being built, and forest fires threatening old ones. It’s a place where life isn’t always easy and everybody doesn’t live forever, but it’s full of hope and happiness anyway. They’re going to take care of their own, and they’ll do the best they can, and if they fall in love or rekindle the sparks, well, even better. And that’s the kind of story that keeps me coming back book after book.

Now, when does Sunrise Point come out?