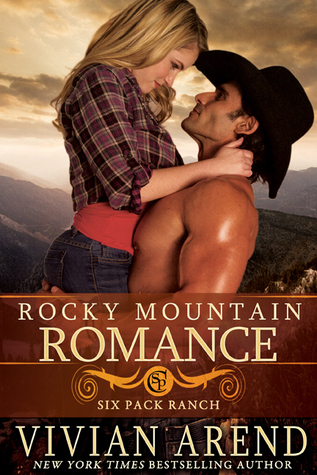 Second chances are the sweetest—and the hottest.

It took a spectacularly embarrassing break-up to knock Steve Moonshine Coleman off his lazy butt. In the ten months since that night, he’s changed his ways. Now that Melody’s back in town, it’s time for this sweet-talking cowboy to convince her to get back in the saddle with him.

A return to her veterinary position in Rocky Mountain House was always in the cards for Melody Langley. Getting back together with Steve? Never part of the plan. He had lots of potential but zero ambition, and there’s no way she’ll accept anything less than a man who can keep up with her, in and out of bed.

But the new-and-improved cowboy is impossible to resist, so Melody issues a challenge. Three months to prove he’s reformed. Three months of Steve orchestrating one sexual indulgence after another—wicked distractions from the old boys’ club Melody faces at work and Steve’s growing responsibilities.

He’s got one shot to prove with more than words what’s in his heart and soul.

Warning: Fifty percent less angst, twice as much filthy-talking, dirty-daring cowboy. Get ready for a whole lot of make-your-knees-weak wooing from a man intent on proving he’s got what it takes, and the woman ready to push him way past his limits.

The Rocky Mountain gang. Oh, how I’ve missed you. Yes, we’ve visited with you in the Thompson & Sons series, but it’s nice to get back to the original clans.

In Rocky Mountain Romance, Melody Langley is returning home after a year away to get some extra training for her veterinary skills. Who does she meet first thing? Steve Coleman. Her former boyfriend. The last time they saw each other was right before Melody left and she was dumping a pitcher of beer over his head in the middle of the local bar in front of his friends and family.

One of Melody’s complaints with Steve from a year ago is he was immature and careless with other people’s time. He was kind of just gliding along without ever stepping up to do what needed to be done. In this book Steve knows what he lost when he lost Melody and he’s determined to get her back no matter what. So while she’s spent the year studying, he’s spent the year growing up and facing some unpleasant realities about how he used to be.

WARNING: SPOILERS AHOY! Read on at your own risk.
(highlight paragraph to read spoiler)

While I liked this book, and this couple, quite a bit, I finished the book a little disappointed. I felt the whole situation between her and the ranchers was wrapped up a little quickly, and I wanted to know what Tom’s problem was. Was he annoyed she was left in charge? Was it that she was younger? newer? a woman? Not him? Was he the one causing the miscommunications or was it truly just a series of unfortunate events? I’m a demanding reader. I want to know MORE.

The romance between Steve and Melody hit all the right notes. Seeing Steve struggle to really listen to Melody this time around and be a better man, both for her and for himself, was great. I felt he really paid attention to what was missing from their relationship before and he was putting in the work to make sure it didn’t happen again. He was in it for the long haul.

Melody was also willing to step up. She knew she was taking a risk on trusting Steve again, but she did it anyway because she could see how he had changed and Melody acknowledged that if he could put himself out there again, the least she could do was meet him halfway. It was also nice that she didn’t blame Steve for everything that had gone wrong before. It was as if their relationship was on hiatus while they each grew up a little and decided whether they were going to move forward together or not.

And here’s the part where Vivian Arend always gets me. She has these tortured men in her books that always just grab me and won’t let me go. They spend lots of time as minor characters in books before they get their own stories. The last one was Travis. I loved Travis from the moment I met him, and I KNEW his book was going to break my heart. And it totally did. And I loved every. single. moment. Now there’s Rafe. He’s Gabe Coleman’s younger brother from Rocky Mountain Angel, and he’s another one who is going to break me once she finally gets around to writing his story. Can’t wait.

All in all, and minor disappointment aside, this was a solid addition to the Six Pack Ranch books.