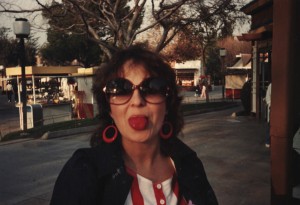 This past Saturday was the 1-year anniversary of my mom’s death. In some ways it feels like it has been 5 minutes, and in others it seems like it has been forever. The year since she died has been interesting. I’ve done new things, such as attended my first ever conference. I’ve started my own business. I’ve taken chances and opportunities I’m not sure I would have before she died.

I’ve also been standing still. Nothing of hers is gone yet. I’ve packed up exactly 2 dressers of her clothes. Everything else is as she left it, except maybe a little messier. LOL. The only thing of hers I’ve actually given away was her fabric. She was a quilter, so she had The Fabric Stash Closet. LOL It was a towering beast of fabric crammed into every single bit of space, and it was impressive. 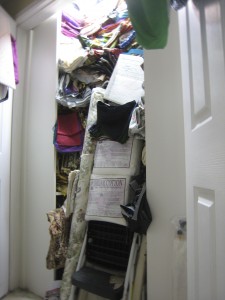 I’ve turned it into my Yarn Stash Closet. 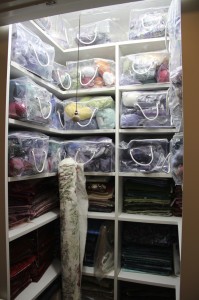 Other than emptying those two dressers and cleaning out the fabric, I haven’t done a darn thing to change the house from Chez Bear to Chez Guppy. For the longest time I couldn’t figure out why every time I went to clean out her clothes I just couldn’t make myself do it. Honestly, she TOLD me to get rid of her clothes. She said to do it first thing. There is no sentimentality attached to the clothes, so just give them to charity ASAP. It’ll open up so much more storage space for me. (Seriously. The woman was a clothes horse. 2 closets (1 a walk-in), 1 large armoire and 4 dressers!) Every time I went to do it, though, I’d find something a lot more interesting to do. Like clean the kitty litter or organize the spice cabinet. I couldn’t understand why I was so against cleaning out her clothes.

And then it hit me.

Mom used to buy furniture–antiques–and then give them away later. She used to do it all the time. Her house was small, so she’d buy a piece and live with it for a while, and if she found a piece she liked better, she’d get rid of the old one. She gave stuff to friends, family, co-workers, etc. She did it all the time. So if I get rid of furniture, or even knick-knacks, it wouldn’t be strange. Things were in flux at Chez Bear all the time. But her clothes. Ah, her clothes.

If I get rid of her clothes, she’s not coming back.

And that’s why I’ve been so hung up on cleaning out her clothes. Obviously, I’m well aware of the fact that she’s not coming back, but emotionally I just haven’t been ready to face that fact.

As for the rest of her things, well, I’ll get there eventually. The biggest problem is all my stuff is in storage, so until I start unpacking some of it, I don’t know what I’ll keep and what I’ll get rid of. Now that it has been a year, I think things will start moving forward again. I’m already looking at couches. LOL.

I’ve battled with some depression this year. I’ve more or less worked my way out of it, but it has been difficult. Especially as I didn’t recognize it for what it was for a long time. Longer than it should have taken me, but I think it was such a gradual slide, it never really occurred to me. Her birthday in November was the worst for me. Some days I couldn’t even breathe without crying. I’ve still got some family issues going on, and an unhealthy amount of anger over it, too. I know if I set up an appointment to talk to somebody chances are good I’d feel better, but I just don’t know if I’m ready for that. I do know I’m tired of being the evil villain in the family.

Saturday was obviously difficult, too. My friends have been amazing. I know. Like that’s news, right? I went to an event with a bunch of my good friends and they all started out asking how I was and if I wanted to talk about mom or pretend Saturday wasn’t the anniversary. They did everything they could to make sure I was okay and had whatever I needed emotionally. These friends are some of the best women I know, and they always amaze me with their willingness to reach out and help however and wherever they can.

So all in all, it’s been a rough year. I’m getting through it. I have some exciting plans for this year and next, and am moving forward. Slowly, but surely.

Love,
Lynda the Guppy
aka A Better Guppy
aka The Fish With Sticks

As some of you may know, before mom died I had started reviewing contemporary romance books over at WickedLilPixie for my friend Nat. Nat and I lost our moms within days of each other. It’s amazing how something that traumatic could bring about such a wonderful source of comfort.

I wrote about our mutual grief and things people can do or say to help, and you can read my post HERE. You might want to grab a tissue. It seems I’ve made everyone cry. Not my intention! I swear!

In the meantime, my dad came over for dinner last night and we talked about everything, as we usually do. This morning he called me and we had this conversation:

Dad: How are you doing today?

Dad: I’m going to keep calling you every day until you answer “I’m doing GREAT!”

Best. Dad. Ever. He’s been my rock through this entire ordeal. One day I’ll tell the story about getting my mom Last Rites. LOL. Believe it or not, that’s a funny story. ESPECIALLY if you know my dad.

Love,
Lynda the Guppy
aka The Fish With Sticks
aka A Still-Grieving Guppy