When I saw Lynn LaFleur’s Smokin’ Hot was up for review, I grabbed it quick! Why, you might ask? Well, let’s take a look, shall we:

All it needed was an ugly duckling story or a beauty and the beast story and you’d have all the tropes I love in one book.

Happily I can report I really liked this book. It was a collection of three novellas (Singe, Spark, Smolder) all centered around the Volunteer Fire Department in Lanville, Texas. They were voted the Hottest Fire Department in Texas, too. The stories were short, yet satisfying, the sex was hot, and the firemen hotter (hubba hubba), and the characters engaging and interesting. I had never read anything by Ms. LaFleur before, and I could tell there were other stories already told about these firefighters, but I never felt I was missing something by not reading all the stories in order.

My one complaint, and it’s kind of minor in the grand scheme of things, was some parts of the sex scenes carried over from one story to the next. For example, there were mannerisms the guys all did in the bedroom which wouldn’t happen in real life. And no, I’m not talking about Tab A fitting in Slot B. I’m talking about specific instructions they give and the gestures they make are an obvious result of one author creating all the scenes. I wish that had been caught during edits. It’s really more of an author’s writing tic than a conscious decision. All authors have them, but usually they show up across several books. In this case, Ms. LaFleur had them all show up in different stories within the same book.

Like I said up above, I enjoyed this book. It was a quick, entertaining read, and I’ll be on the lookout for the next book in the series to see what everyone’s up to.

If I can admit to liking Air Supply, I can admit to loving this book, right? This book reminded me of a lot of the early Harlequin Presents with the asshole boss who accuses the secretary of stealing and doesn’t listen. In fact, at the beginning of the book I was flashing back to a classic: Judith McNaught’s Double Standards. At the end when Nick…Well, I won’t spoil either book. However, with Baby, It’s Cold Outside, the secretary wasn’t a shy virgin and the asshole hero wasn’t always an asshole, and you never feel like at some point the cops are going to need to be called to protect the heroine from the hero.

My biggest complaint with this book is Linc doesn’t do NEARLY enough groveling. I know. I know. I’m a Grovel Slut, and there’s never enough to suit me, but what Linc does to Thea was pretty bad, and I don’t think he fully realizes HOW bad it was. Yeah, he had reasons, but he still handled the situation completely wrong and I felt he needed to recognize it. And learning about his childhood, while it made me sympathetic towards him, wasn’t enough to make up for him not crawling for Thea. I’m hoping we get Chelsea’s book, because there’s a backstory there I’m really interested in learning more about.

Thea for her part forgives him a little too easily. There were several points in the book where I would have had Linc physically removed if any guy behaved the way he did. Since we got glimpses into this temper and backbone Thea supposedly has, I would have liked to have seen more of it.

Basically, I just wanted this to be a full-length book. LOL. I think it would have done much better in a longer format. And possibly even more grovel.

All that said, I still really enjoyed it. And the opening scene was pretty damn hot.

Ahhhh Holiday Stories. Is there anything better to read in November and December? I didn’t think so.

I’ve read the first three books of Jaci Burton’s Play-by-Play series, and have enjoyed them quite a bit. I love reading sports heroes. There’s just something so sexy about a hero so focused and athletic. *shiver*

And seriously, does ANYONE get men on their covers hunkier than the ones for these books? Because YOWZA. They’re the few covers I actually collect. 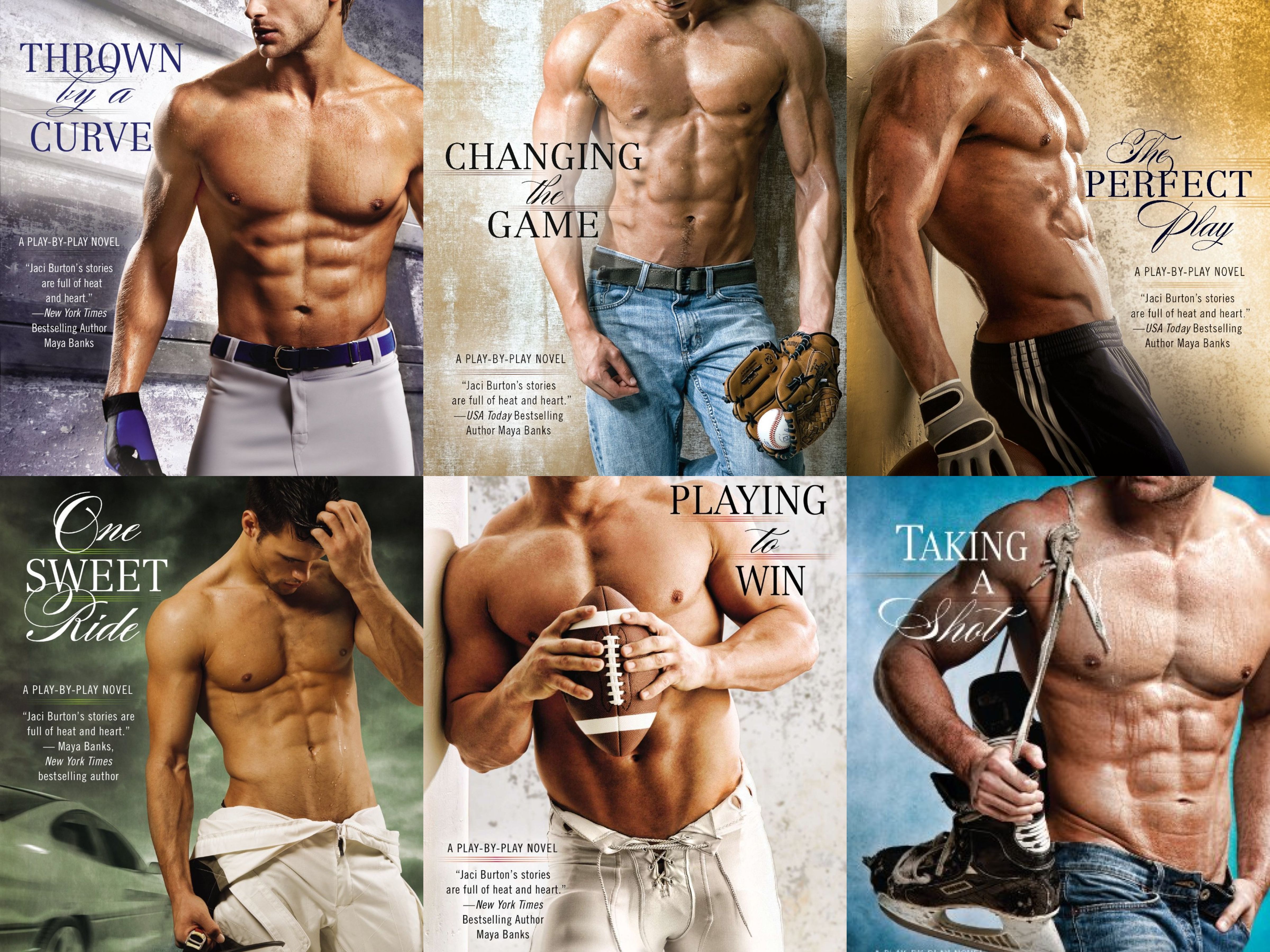 See what I mean? The first one, The Perfect Play, remains my favorite cover. Mmm.

With Holiday Games, Jaci Burton gives me what I consider to be an ideal holiday story. Lots of family, holiday festivities, a little angst, but not a lot, a look at favorite characters from past books, and a quick read. It’s the Christmas cookie of books. Sweet and tasty, and perfect this time of year.

I’ve always liked Liz. I know she was a total bitch in The Perfect Play, but her heart was in the right place, and she more than makes up for it in her book, Changing the Game, so I was excited when I saw she and Gavin would be the focus of Holiday Games.

Liz and Gavin are trying to have a baby, but they’ve been trying for a while and it hasn’t happened yet. Liz is getting a little discouraged, but she’s determined to keep her hopes up and tries to hide how she’s feeling from Gavin because she doesn’t want him to be upset because she’s upset.

What’s fantastic about this book is these two are totally honest with each other. I know. I just said she’s trying to hide her feelings, but she’s not successful. LOL And when he realizes she’s making herself crazy over their first time hosting Christmas at their house, he calls his mom for help. Yeah, he does it and doesn’t tell Liz, but she knows. They both act out of their great love for each other and they have each others’ backs at all times. When she isn’t sure if she wants to talk to the family about something, he covers for her without even thinking about it. These two are clearly A COUPLE and NOTHING will shake them.

I’ve found through the years that while I love books where the relationship is in jeopardy at various stages, my favorite books are usually the ones where the conflict comes from outside the relationship, and this one has the perfect amount of angst for me. It was a sweet, brief glimpse into the lives of the Riley family and a novella which will be added to my yearly rotation of holiday reads.

This review was original posted
at www.wickedlilpixie.com

One thing you need to know about me. I am an absolute SUCKER for holiday stories. Holiday novellas, especially. They’re usually short enough to be quick reads between family holiday…excitement…and yet long enough to be satisfying romances. They’re sentimental and sappy and I love them like you would not believe.

Back in 2010 when I was just beginning to figure out this whole Twitter thing, I was following Sarah from Smart Bitches, Trashy Books and she was raving about a short story titled Holiday Sparks by an author I’d never heard of: Shannon Stacey. I took a chance, (and, hey, Holiday story!) and bought the novella. I remember I sat at my dining room table while my mom was getting ready for us to go to a New Year’s Eve party at my aunt’s house and read the entire thing. I. Loved. It. The next day I went to Amazon and bought her entire backlist.

In 2011, Shannon Stacey published Mistletoe & Margaritas. Another holiday story! Yay! I continued the tradition and read it on New Year’s Eve. Loved it even MORE than the last one.

So imagine my disappointment when I found out there would be no holiday story from Ms. Stacey in 2012! But…but…but…WHY?!?! Turns out she wrote a summer short story. Well, okay, at least I got a story, but it just wasn’t the same. Rumors of pouting, whining, and throwing myself on the ground kicking and sobbing are greatly exaggerated.

This year Ms. Stacey is OBVIOUSLY making it up to me, because I get not one, but TWO stories this holiday season. YAY! I haven’t read Snow Day (yet), so I’m not sure if its actually a holiday story or not (I don’t really care. Snow. Novella. Shannon Stacey. I’m in), but Snowbound with the CEO most definitely IS and it’s a fantastic way to kick off what I like to call “Holiday Novella Season.” It may be too early for Christmas lights (Staring at you, neighbor down the street) or Holiday displays in stores, but as soon as Halloween is over, I start hoarding ALL THE HOLIDAY STORIES. I store them like a squirrel stores nuts, keeping them to help me through the bleary winter days with too much food and WAAAAY too much family togetherness. LOL.

In Snowbound with the CEO, Adrian Blackstone is a handsome and successful owner and CEO of Blackstone Historical Renovations, and he wants his executive assistant “more than he’d ever wanted a woman in his life.” Rachel Carter wears sensible heels, professional clothes, has been working for Mr. Blackstone for 16 months, and is trying to remember seducing her boss will end with being unemployed.

They’re at one of Adrian’s former renovations to meet with and impress a potential client. As the title suggests, they get snowed in and hijinks ensue. They’re snowed in at a luxury hotel with guests and a full staff, so its not like they’re roughing it. The nice bit about this (versus the usual “stranded by ourselves, whatever will we DO until help arrives?!” plot) is it gives Ms. Stacey the ability to focus solely on Adrian and Rachel and their interactions with each other, rather than having to spend precious novella pages rescuing themselves in some way. That kind of thinking and paring a story down to focus on its most important elements are things Ms. Stacey excels at and is part of what keeps me coming back book after book.

After discovering they’re snowed in, Adrian heads to the bar and sees a woman at the bar whom he is instantly attracted to. She laughs and he’s entranced. When he sits down next to her he discovers…its Rachel.

Number thirty-two, or thereabouts, on Rachel’s list of one hundred and one ways to seduce her boss was to pretend to be a stranger in a bar. Being mistaken for a stranger in a bar was close enough to send a little sizzle down her spine.

“I don’t think I’ve ever heard you laugh like that before,” he said, and it wasn’t in his Mr. Blackstone voice. It was definitely a picking-up-a-woman-in-a-bar voice.

“You’ve never told me a joke about two elves, a reindeer and a candy cane.”

He swiveled his stool a little toward her, so their knees almost touched. “Let me buy you another drink and I’ll think of a joke.”

They share their first kiss after a dance, and I melted. A good sexy dance scene is nearly as romantic and sexy to me as anything that happens in the bedroom.

Although a conversation like this while dancing ups the Sexy Quotient drastically. fans self*

This was a fun and (not to be to redundant) a sexy read. They spend the better part of a weekend in bed in a lodge only to come home and have a misunderstanding or two which keeps them apart for a little while. There is some angst, and there are some supportive family, a Stacey trademark, and a Merry Christmas and Happily Ever After, of course. It IS a Holiday Novella.

I’m thrilled to add Snowbound with the CEO to my Shannon Stacey Holiday Novella Collection. I’ll be reading it every year just like I do Mistletoe & Margaritas and Holiday Sparks. Reading these stories has become one of my favorite holiday traditions.