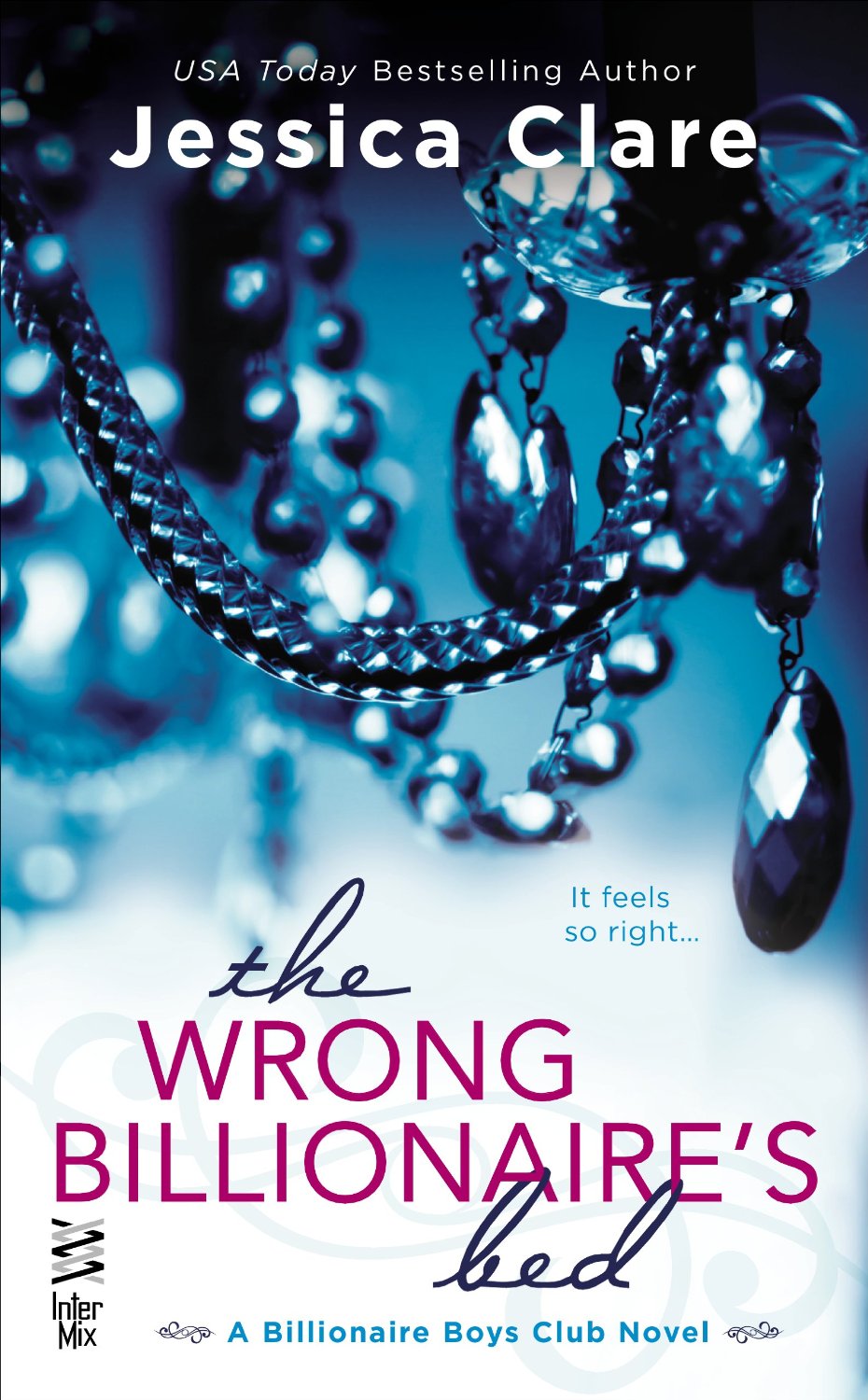 The Billionaire Boys Club is a secret society of six men who have vowed success–at any cost. Not all of them are old money, but all of them are incredibly wealthy. They’re just not always as successful when it comes to love…

Audrey Petty’s always been the responsible one. The good twin.  Successful, dependable, and trustworthy–that’s Audrey. She’d be the perfect girlfriend for her childhood crush, billionaire Cade Archer…except that she’s pretty sure she’s not even on his radar. But when fate (and her chaotic twin) come together, Audrey finds out that she’ll be spending the next month with Cade at his remote cabin retreat. It’s a dream come true…

Until she meets her worst nightmare.

Billionaire playboy Reese Durham is used to seducing women to get what he wants. But when stiff, too-proper Audrey bursts into the private mountain lodge and scares his companion out the door, it’s time for a little revenge. It’s clear that Audrey’s in love with his buddy, Cade…and it’s clear to Reese that blackmailing Audrey with this information can get her to agree to just about anything. Like furtive kisses in the dark, or a secret rendezvous in the woods. Audrey may think she knows what she wants, but Reese is determined to show her what she needs.

And as Reese discovers the volatile minx behind the buttoned-up exterior, he starts to think maybe she’s just what he needs, too

Oh, dear. I wanted to like this book. Really. I did. I’ve been reading the Billionaire Boys’ Club series and enjoying them. In fact, Book 2, Beauty & The Billionaire, is one of the best books I’ve read all year. One of only a handful of 5-star books for 2013. But this one. *sigh* I don’t even know where to begin.

Here’s the premise. Our Heroine, Audrey, is the personal assistant to one of The Billionaires, Logan. She’s also been friends with another Billionaire, Cade, since grade school. And she’s been in love with him all that time. So she and her druggie, alcoholic, rock star sister go to Cade’s cabin in the woods so Daphne (the twin. Did I mention they’re twins? Not identical, thankfully) can dry out. That’s right. Instead of taking her to get her professional help, Daphne talks Audrey into going it alone. In the woods. With no medical training and no medical help anywhere around.

So they get to the Magical Cabin of Instant Rehab only to find ANOTHER Billionaire, Reese, in a hot tub with a woman. Because of DRAMA, Audrey manages to make Barbie (not her name) leave, screaming, wet, half-naked, and with Reese’s suitcase and cell phone in the only car they brought.

And then to round out our Party of Fun Times with Druggies, CADE shows up. Yup. The one Audrey has been in love with since grade school. Oh, and just to make sure we didn’t have ENOUGH going on at The Magical Cabin of Instant Rehab, Cade’s in love with Daphne.

And that was just Chapter One.

Oh, how I wish that was a joke.

My biggest issue with this entire book is there is way too much game playing. Reese figures out pretty quick that Audrey is in love with Cade, and not long after figures Cade’s in love with Daphne. Instead of treating Audrey like a person, he “teases” her in front of Cade and makes her uncomfortable again and again. Even though he knows she thinks she’s in love, he gets her to kiss him and to go skinny dipping with him. If he cared for her AT ALL, he wouldn’t do this to her. Through the entire book he acts like those tween boys who hit the girls they like instead of talking to them.

Audrey is no better. She actually takes love advice from Daphne The Detoxer, even AFTER Daphne admits the next day she has no memory of giving any advice. We keep hearing again and again about how WONDERFUL Cade is and how GIVING he is and how CAPABLE and SUPPORTIVE he is, and really, he sounds like a total sap. But even knowing all this, and knowing she believes she’s in love, and WANTS TO USE THIS TIME TO FURTHER HER RELATIONSHIP WITH CADE, Audrey still makes out with Reese, has sex with Reese, and even gets Daphne the Detoxer and Cade the Capable out of the house for the day so she and Reese can fuck all over the place. But really. She’s in love with Cade.

Here’s another gripe. Audrey the Amazing wants to use The Magical Cabin of Rehab as a way to get closer to Cade the Capable, WHILE HER TWIN SISTER IS COMING OFF OF MAJOR DRUGS. Now, I have no idea about the author Ms. Clare’s history or what research she may or may not have done, but I’ve lived with a drug addict. I’ve gone through the detoxes and the rehabs and the empty promises, and while Ms. Clare made an attempt to portray detoxing as unpleasant, she didn’t even come close. Also, someone who is dealing with a sister, a TWIN, whom she’s supposedly so close to, trying to detox and get clean after years of addiction wouldn’t even be considering using that time and place as a romantic getaway. Because nothing says Sexy Times like cleaning up vomit and other bodily fluids while trying to keep the addict fed, clothed, and away from anything sharp.

The Big Misunderstanding happens, and Daphne the Detoxer has a hand in it. Reese leaves thinking Audrey’s been using him as a replacement for Cade Her One True Love (hellooooooo?! Not really news), Audrey the Amazing gets pissed and snaps at her sister a little bit. Daphne then jumps into bed with Cade in order to get the Xanax he’s been giving her (Don’t ask. Seriously. Don’t. I’ll just get pissed again) and OD’s. Audrey and Cade get her rushed to the hospital where she’s put into ICU.

And AGAIN, we have a something which takes me immediately and completely out of the story. The family of a celebrity who has been rushed into a hospital because of an overdose would NOT be sharing a waiting room WITH THE PRESS. Would. Not. Happen. Especially with Billionaire Cade the Capable with them. If the hospital didn’t do it, CADE would have. They’d put the family somewhere else, in another waiting room, an office, hell, they’d even stick them in an empty room if they had to! No WAY would they let the family sit there with photographers and other Paparazzo IN THE ROOM. For that matter, the Papparazzo wouldn’t be allowed IN the hospital in the first place. The hospital would have a room set up just for them.

Reese finally hears about all this a few days after it has happened. He’s finally admitting (to himself only so far) that he might have feelings for Audrey. Problem is he’s at Man Night with his Secret Society Billionaire Buddies and he’s drunk. He knows she needs him, though. He knows he’s the only one who can push her until she lets everything out. He knows she’s having a hard time and needs his support now more than ever, but does he decide to wait until he’s sober before he goes rushing to his love’s side? Sort of. He decides to wait a few DAYS and go to her at a WORK cocktail party. Because that’s what she needs. To have a total breakdown at a function she’s WORKING where there’s tons and tons of wealthy, influential people, INCLUDING HER BOSS. Oh, and there’s some financial drama regarding Reese and his company which has been going on, but really I don’t care at this point.

He goes to the party and finds her. She breaks down. Some bimbettes find him. She runs. He catches her. They decide to have a committed relationship, even though his longest relationship to date was probably something like a week. They have sex in a closet and he proposes. SHE ACCEPTS. Oh, and the sex? Unprotected because he wasn’t going there to “score” and she’s “feeling the need to gamble.” Direct quote. No lie.

*sigh* They’ve really known each other for only a few days. They’ve had not one single serious conversation about ANYTHING. They have no idea what their goals are. They don’t even know if they’re dog people or cat people, much less how they feel about kids! I don’t mind an author not showing us everything, but this was just waaaay too fast.

Now we come to the worst part for me. The Epilogue. Three Months later.

It has been three months since the proposal, and they are on a private jet on their way to Hawaii (I think. At this point I was skimming. Someplace he can get her in a bikini) to get married. Her sister is still in Rehab, but in an ACTUAL rehab this time, not The Magical Cabin of Instant Rehab. And get this. Audrey’s pregnant! Yay, right? Except she’s totally stressed and panicking because she hasn’t told Reese. Why not? Because SHE’S AFRAID HE’LL LEAVE HER.

She’s MARRYING the guy and she doesn’t want to tell him she’s pregnant because SHE THINKS HE MIGHT DUMP HER?!?! THEY HAVEN’T HAD THIS CONVERSATION YET?!?! She tearfully tells him and of course he’s The Hero so he’s all happy, but come on. If she’s STILL having these fears and worries, the LAST thing she should be doing is marrying the guy. I’d suggest counseling. A lot of it. For both of them.

Have you made it this far? If you have, here’s the Cliff’s Notes version. There’s no depth to this story. I never got the sense Audrey and Reese ever really got to know each other enough to LIKE each other, much less fell in love. And as a side note Cade seems WAY too nice for someone like Daphne. They all play way too many games and no one ever really has a serious discussion with anyone about anything important. If Ms. Clare had shown us even a little bit of that kind of thing, if we ever got the sense Audrey and Reese connected on anything other than the most superficial level, I’d feel more satisfied at the ending. Even if all the Discussions of Great Importance happened between the end of the last chapter and the beginning of the epilogue, I’d be okay with it, but knowing during the epilogue how Audrey feels about telling Reese she’s pregnant? Yeah, those discussions have never happened. I have no faith they have any idea what they’re getting into with marriage, much less be able to make that marriage work for longer than it will take for their tans to fade.

Too bad, too, because I really did love the last one. Maybe I’m an optimist, but I’m still looking forward to the next one.

Lynda the Guppy
aka Disappointed Guppy
aka The Fish With Sticks